Determined to Work Hard for a Better Life 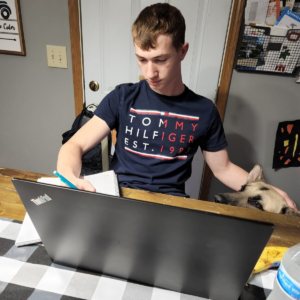 When Frank McManaway attended the assembly at Briggs High School that announced the Columbus Promise, he was not expecting to hear that he was among the first graduating class to be offered the opportunity to attend Columbus State Community College tuition-free. Born and raised in Columbus, Frank got good grades and was always interested in computers. He had a desire to go to college, but watching his older sister rack up debt to go to Ohio Northern had him second guessing his choices.

“Hearing about the Columbus Promise shocked me! At first, I couldn’t believe there were no strings attached! Even my parents didn’t believe it when I told them!”

After following all the steps to get accepted into the program, Frank started this fall at Columbus State as a cybersecurity major. He plans to attend for two years and get an associate degree before transferring to a four-year college. He is balancing his studies with working full time at Armstrong World Industries on the assembly line to save money for the next part of his college journey.

“I’m grateful that the Columbus Promise made college accessible to me. I’m using the program to make it easier to get to my goals. It has eliminated the stress I was feeling about paying for college and being burdened with debt.”

We can’t wait to see what Frank’s future hold, but we know he is working hard to make his dream of having a fulfilling career a reality.