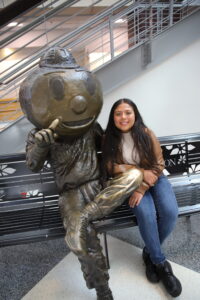 Jacqueline Lopez Reyes always dreamed of going to college, but during her freshman year at Westland High School, she put that out of her mind. Her parents worked too hard for her to burden them with student debt and as the oldest of four, she didn’t want to be selfish. She told her friends that if she didn’t get a full ride, then she wasn’t going. When her friends told her that was unlikely, she believed them.

Still, Jacqueline worked hard and was determined to try her best and get good grades. Online school during COVID was a big challenge for her but she persevered. When her junior year came around, she decided she wanted to apply to some colleges, but she was lost. “It was like a had a blind fold on and didn’t know where I was going,” she said. “I had an end goal in mind, but I didn’t know the steps to take to get there.”

Luckily, she found two advisors on site at her school who showed her the way. Emma Emrich, a College Advising Manager, and Jimena Esparza, a College Success Coach, work for I Know I Can, a college access organization with advisors in 27 high schools in central Ohio.

“Ms. Emrich and Ms. Esparza helped me with everything. My mom and I attended a FAFSA workshop, they helped edit my college essays, and they showed me how to fill out applications. But most importantly, they gave me pep talks and motivation.”

When Jacqueline received the news that she had been accepted at The Ohio State University, she was elated. She texted Ms. Emrich immediately with the news and got back a text that said, “I knew you could!”

Still, paying for college was still a concern. The team set out to help Jacqueline find and apply for as many scholarships as she could. She applied for so many, she lost track of them all. When she received an email that said she had won free tuition through a Morrill Scholarship, she thought it was too good to be true. “I had a teacher once that had warned us to be distrustful of emails and that if it looked too good to be true, it probably was.”

Jacqueline went to Ms. Emrich who looked at the email and confirmed that the email was real. “She was ecstatic for me. This was the golden ticket I was looking for! When we laid out all of the grants and scholarships I received, including the Morrill Scholarship, we realized my parents were not going to have to pay for anything.” Jacqueline had done it! She was going to college with a full ride.

While Jacqueline did all the work: she got the good grades, filled out all the paperwork, wrote the essays, and kept asking questions and showing up, she attributes her I Know I Can advisors with being the difference for her. “Without them, I couldn’t have done it. I really don’t think I would be here without them.”

Jacqueline is a first-year student at The Ohio State University majoring in accounting and contemplating adding a minor in real estate or computer science. She is well on her way to achieving her dreams!